In my opinion, if someone called leader it surpasses his/her title. Whether he/she is only a coordinators, junior managers, middle managers, top managers, or a CEO. It means that he/she is acknowledged as someone that other person trust.

Now you see my value of leadership? It’s trust. Followed because he/she is trustworthy.

Everybody grew up looking up to somebody, as their role model. Someone I want to grew up like.

When I grew up, I want to be like Michael Jordan! Or Larry Johnson! Or Charles Barkley!

I used to said that when I was a teenager. I want to play basket ball all day long, famous, rich. Imagine that all you ever do all day long everyday through years is just playing basketball and you get paid for that. You get paid for making points, blocked some shots, do some rebounds, make a sweet pass so you’ll let your team mate scores easily. You get paid for dribbling, pass, and shoot the ball around….

Said, If I grew up with skills and body like Michael Jordan, or Charles Barkley, or Larry Johnson. If…

What if someday, when you grow up, you realize that being a basket ball player is not really…. you! Yes, it didn’t suit you,  at all. So you must walk on, find another dreams to make it come true.

And find another role model! Someone you want to grow up like.

And I found my next role model. I met him at April 2005. At my first day stepping up to this company. Which still fulfilling what I need until the day this blog made 🙂

The man is called Adji Andjono.

And if a ‘leadership’ or ‘maturity’ or ‘witty’ or such similar words come across, believe me. It’s his name that come across 🙂

May God bless you and family. Giving you health, success, and many happy returns. 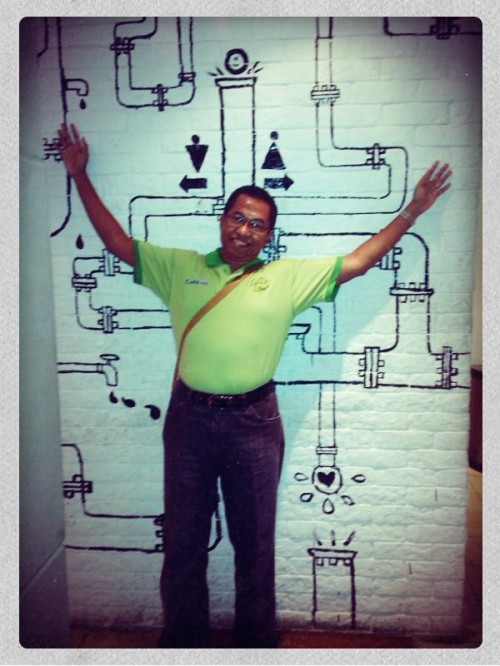 And the image above is taken at Luve Litee Blogger Gathering, June 22nd 2013 at Cafe Aria-Menara Panin.

The best picture of him I’ve ever take, with all do respect 🙂